The Grand Opening of Galleria Italia 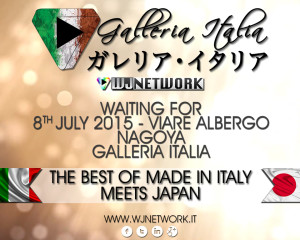 The Italy of the Excellences gives to its partners an appointment in Japan on the 8th of July for the Grand Opening of Galleria Italia.
Nagoya, Japan – The Made in Italy will have another ally in the promotion of its particular Excellences: Galleria Italia! In the exclusive district of Higashi Sakura in Nagoya, the WJ Network boosts the best of the Italian production with a new concept store, an extraordinary showroom in which the “Belpaese”’s realities can be appreciate in the marvelous setting of “Viare Albergo”, an unique building of the city, shaped according to the Italian design. Over the 150 square meters of the show floor the visitor will order or buy the same products which makes Italy an unique country in the world, where Artistic inspiration rules everywhere, in Gastronomy as well as in Fashion, and here our guest will take a journey through a Gallery as unique as the Country which represents: Galleria Italia.

This website uses cookies to improve your experience while you navigate through the website. Out of these, the cookies that are categorized as necessary are stored on your browser as they are essential for the working of basic functionalities of the website. We also use third-party cookies that help us analyze and understand how you use this website. These cookies will be stored in your browser only with your consent. You also have the option to opt-out of these cookies. But opting out of some of these cookies may affect your browsing experience.
Necessary Always Enabled

Any cookies that may not be particularly necessary for the website to function and is used specifically to collect user personal data via analytics, ads, other embedded contents are termed as non-necessary cookies. It is mandatory to procure user consent prior to running these cookies on your website.